What happened to Freedom 251 Smart Phone ?

March 20, 2016
It has been more than a month since mobile company Ringing Bells announced the upcoming of low budget smartphone Freedom 251.The launch of Feb 18 event of Freedom 251 did make headlines across the markets of US and UK and everyone was surprised if that was possible for a company to sell the smartphone for just Rs251.

No doubt with the news of low budget smart phone in the race of Apple's iPhone and Samsung's Galaxies the company claimed 30K pre-orders on first day of sales forcing them to suspend any further orders. 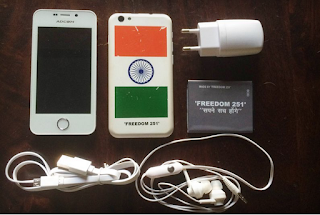 Global mobile manufacturing companies like Apple are well aware about the rising market in India for smart phones and are striving hard to accomplish themselves in the market as of US and UK.

But with the rise of the upcoming Indian companies like Micromax and Intex providing customers with low budget phones the competition has taken a different turn for the biggies like Apple and Samsung. The possibility of India to overtake the United States in smart phone purchase is now just a matter of time.

The launch of Freedom 251 for $4 was just unexpected as per the sources stated from Apple and Samsung.The New fish in the town did not seem to be right from start,hence when more information was gathered it came to notice that it was Adcom Ikon 4s a $61 handset from Delhi based company which was used as Freedom 251.

More on investigation it was confirmed that Ringing Bells listed all of its phone unavailable for immediate sale,the customer support was unavailable and the social media was flooded with unhappy customer comments.

Also Adcom has threatened to seek damages against Ringing Bells for dragging them and hampering their brand name and reputation in the market.

It was also recognized that in case of rebuilding Freedom 251 like Ikon 4s the rough estimated cost at the minimum could go to Rs 2500. So there is no way selling it for Rs 251.

The configuration which says about Ikon 4s consist of solid 3G connection ,1.3 Ghz quad core processor, 1 GB Ram and 8 GB internal memory, it uses a standard size Sim and not nano\micro sim.
It also has 3.2megapixel camera and headphone jack.

October 27, 2011
This Summer it has been tremendous pressure for the Phone companies as some of the spectacular smartphones been released this summer.It was a mere surprise to see that one motivated another and same way dethroned each other in supremacy to be on top, the Motorola DROID BIONIC, Samsung Galaxy S II for T-Mobile, and Apple iPhone 4S all sailing the same boat yet competing for best of the best.Everyone waited this summer to see the outstanding quality phone but yet to make decision on what to choose. Design Starting from iphone4s the sporty and classy design make you feel royal with its glassy surface and smooth finish by its stainless steel brushed band which catch your eye at first site,Comparing Motorola DROID BIONIC and Samsung Galaxy S II with it they are decent in their own way for professionals and office guys because of the plastic construction but still as compare to iphone4s somewhat down,But when it comes to the Drop down Test as of earlier post
1 comment
Read more