October 19, 2011
Galaxy Nexus phone running Ice Cream Sandwich,was uneveiled by Google and Samsung on Tuesday the latest android phones .Andy Rubin,senior vice president of mobile at Google announced that the phone and operating system were developed collaboratively by engineers from both companies that literally worked in the same building .Also the name of the device combines that of Samsung's line of Galaxy phones and tablets with the Nexus line of phones that were made by various manufacturers but were known as Google phones because they included all of Google's mobile services.This phone will run on high speed LTE networks as well as HSPA+ networks, as per the market demand. It might become available in November in the Europe, U.S. and Asia, including China and Japan. Japan's NTT DoCoMo is the only operator the companies announced and they did not disclose pricing information.

Also the Ice Cream Sandwich which was designed to unite the tablet and Android phone into one operating system, there was no mention of tablets during the event. Honeycomb, the previous version of Android which has yet to be released as open source, which was just designed for tablets. 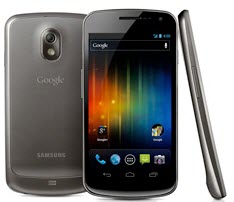 Even though Ice Cream Sandwich has some minor updates,Google has added some neat features to some of its services, many of them reminiscent of features on other mobile operating systems. One of the most noticeable changes to the operating system is that it requires no physical buttons. The Galaxy Nexus only uses buttons that appear on the screen as part of the user interface. Also the user interface that includes a new swipe feature that lets users drag applications or items off the screen to shut them down or delete them.Along with some added features like new font called Roboto. Most of Google's applications are updated for the new operating system. The browser will let users opt to view the full web site instead of the mobile version by clicking on a drop down menu item.The calendar app has also been updated so that pinching and zooming on a list of appointments for a day displays more details of each appointment. Ice Cream Sandwich also has a number of neat additions to the camera application. The camera has zero shutter lag--it takes a photo the instant the user hits the capture button. A new panorama feature lets a user take a panorama shot simply by slowly panning the camera across a scene. The application stitches the photos together.

The software also features a new People app that is reminiscent of the similar Windows Phone application. Barra called it a "magazine style UI" that features large blocks of photos, much like Windows Phone's Metro tiles.
Tapping on a contact in the People app displays a large photo of the person, all the contact information and all the ways a user is linked to the person, such as via LinkedIn and Twitter. Users will be able to add individual people to the phone's home screen for easy access, like Windows Phone users can.
Ice Cream Sandwich uses Near Field Communications in a new way in an application called Android Beam. Galaxy Nexus users will be able to tap their phones against another phone to share web pages, maps, YouTube videos and even games.
Users will be able to create folders of applications on their home screens in a similar way that iPhone users make folders. By dragging one application onto another, the user creates a new folder.
A new screen shot capability lets users hold down the power and volume buttons at the same time to capture a photo of the current phone screen.
Ice Cream Sandwich also now includes facial recognition technology that allows a user of the Galaxy Nexus to look into the phone's camera to unlock it, rather than typing in a code to pass the lock screen. In a demonstration at the event, the technology failed to recognize Matias Duarte, senior director of Android user experience who showed off the new operating system.
The phone features a 1.2 GHz dual-core processor and a large, 4.65 inch Samsung HD Super Amoled display with 1280 pixels by 720 pixels resolution.
Samsung and Google initially planned to introduce the phone and new software last week during the CTIA conference in San Diego. But at the last minute they cancelled the event, saying it wasn't the right time to introduce a new phone so close to the death of Apple founder Steve Jobs, who passed away the previous week.While Android is the number one smartphone operating system, Apple's iOS still holds mind share and new iterations of Android often appear to attempt to one-up the iPhone. Apple began selling the iPhone 4S on Friday and said it sold 4 million in the first three days, more than double the sales of the iPhone 4.