Nokia's Lumia Windows Phone a wise purchase or not????

October 31, 2011
It was Nokia who was the center of attraction last few weeks because of its exclusive launch of Lumia Windows phone 7.5.This was the smart phone release by Nokia after tie-up with Windows.
The launch of Lumia shares similar  features as of MeeGo powered N9 which included the single-piece polycarbonate construction which looks similar but the addon to it is the singlecore 1.4Ghz processor,16GB of internal storage ,512 MB ram and 8-megapixel camera along with the video resolution and capture is 720p video with 3.7 inch and WVGA resolution with Clear Black Amoled display is an icing on cake.No doubt the market rate will be higher as approximately $585 but U.S might have to wait a bit too long . 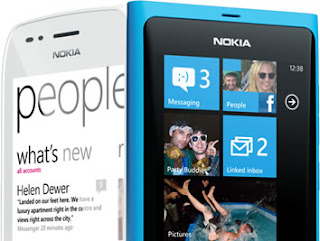 In order to acheive something Big as it is wisely stated "Drop him in water and he will learn to swim by himself " so is the Nokia who opted to take a large Leap and jump directly into the European Market first rather than taking small footsteps however but to succeed  widely and get recognized by developers and other masses they definately need to built a strong reputation and for that they need Big and well reputed Global Partners to compete with Greats like Samsung ,Motorola and Apple and definately other masses who have immense support for iOS and Android.

Eventhough Windows Phone has HTC and Samsung but none of them is fully commited to advance the platform thoroughly.The sources revealed that Microsoft is going to host and event on 7th November related to Windows Phone and might then learn something more relate to U.S market and style to avoid the lack of involvement in their market.

No matter the fact remains aside that how much this smartphone will do wonders as can someone forget iphone and samsung galaxy like mobiles and opt for the Lumia is tough to predict also the lack of app support as of Android and Apples apps will this be a thriller to purchase no one can guess.